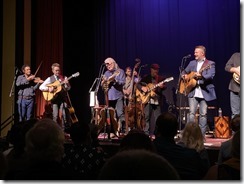 Ricky Skaggs was a successful country musician when he decided to fully embrace bluegrass music in his recordings and performances. He formed Kentucky Thunder in the late 1990s and together they released some of the finest bluegrass recordings of the past 25 years.

Sunday evening, Skaggs and Kentucky Thunder brought their magic to The Old Town School of Folk Music in Lincoln Square.

Every single member of Kentucky Thunder is an outstanding musician. With a heavy influence on strings (3 guitars, fiddle, mandolin, and standup bass for most songs), the evening featured plenty of picking and these guys are master pickers! Some of them have been with the band for years and some joined this year, but their playing and harmonizing were tight throughout the evening.

Skaggs and co. delighted the audience with almost two hours of bluegrass music. He mixed originals, covers, and standards; he mixed instrumentals and vocals; he featured himself as well as members of the band. Three members sang songs they had recorded and released on their own albums. Highlights included "Highway 40 Blues", "Uncle Pen", and "Black Eyed Susan".

Lead Guitarist Jake Workman was especially impressive with his fingers flying across his instrument. Rhythm Guitarist Dennis Parker shared his heartfelt story of his ongoing recovery from alcoholism (He has been sober 5+ years) before leading the band in a wonderful rendition of John Prine's "Paradise".

Skaggs was charming and personal. He sang lead and played mandolin on most songs, occasionally switching to guitar. He did spend a lot of time tuning his mandolin between songs, but that is understandable considering the instrument is in its 99th year. Whatever he did, it was worth it.

For an encore, they performed a moving a Capella version of Doc Watson's classic "Down in the Valley to Pray".

I enjoyed this concert as much as I’ve enjoyed any show this year. Mr. Skaggs strikes me as the kind of person I would love spending time with, sharing a meal together or talking. I definitely enjoyed spending Sunday evening with him and his friends.