"Sandman: The Dream Hunters" by Neil Gaiman and Yoshitaka Amano 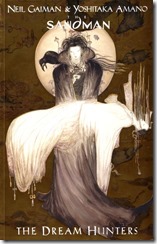 Long ago, in an isolated temple in the mountains near Kyoto, a magical fox falls in love with a monk. When the monk's life is threatened by a powerful rich man and his hired demons, the monk and the fox must choose whether to sacrifice themselves for the other.

They seek the help of Morpheus, the King of All Night's Dreaming - a character introduced in Gaiman's popular Sandman comic series.

Sandman: The Dream Hunters is a novella written by Neil Gaiman and illustrated by Yoshitaka Amano. Amano is famous for his work on anime projects video games and he adds depth to this story with beautiful watercolor and charcoal images.

This is a simple fairy tale, with the feel of Japanese folklore. It does not add much to the Sandman legend, as Morpheus is a peripheral character here, but he helps to tie the story together with his advice and philosophy.

Immediately after reading this novella, I read P Craig Russell’s comic adaptation, which was a simplified version of the same story and also worthwhile.