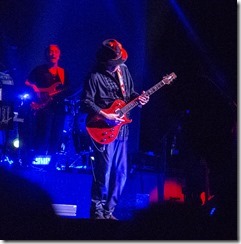 Santana and the Doobie Brothers were two of my favourite bands as I was growing up in suburban Detroit. Sadly, I never had the chance to see either of them in concert. Until this week.

Both bands were on stage Sunday night at the Hollywood Casino Amphitheatre in Tinley Park. 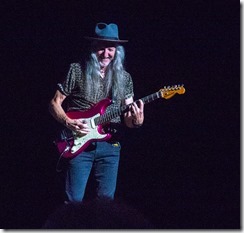 The Doobie Brothers opened the show with an energetic performance - their trademark funky mix of rock, blues, country, and soul.

Michael McDonald is not part of the current Doobie lineup (a stand-in sang "Takin' It to the Streets"), but the last 1970s core of Tom Johnson, Patrick Simmons, and John McFee were there and this was the version of the band I first fell in love with. This was the first time I've ever seen a warmup act come out for an encore, but the audience loved it when they returned to play "Listen to the Music" and "Black Water" (my personal favourite). 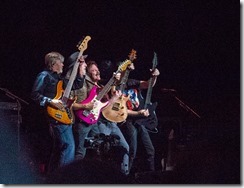 After a brief intermission, the sun set, the lights dimmed, and Santana opened their set with "Soul Sacrifice", their percussion-heavy instrumental from their 1969 debut album.

The centerpiece of this band is and has always been Carlos Santana, from whom the band takes its name. But Carlos has always surrounded himself with excellent musicians and they proved their prowess tonight. Instrumentals alternated with vocal songs; hits alternated with deep cuts; ballads alternated with songs of high-energy and the band was great throughout. It was particularly special when Carlos took over with a guitar solo. At 72, he remains one of the world's great guitarists. He can showcase his technical prowess and bring emotion to his music. 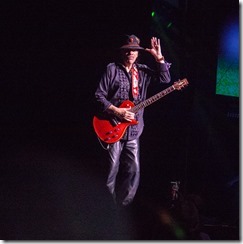 Santana has been able to stay relevant through five decades by reinventing themselves - not only artistically, but also commercially.

He played to the audience between songs, mentioning the influence of Chicago Blues legend Otis Rush on the arrangement of "Black Magic Woman". 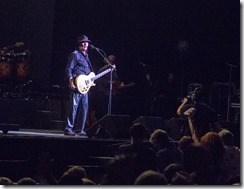 After an encore that included the 1999 mega-hit "Smooth", the band finally left the stage - over 4 hours after the show began.