Shakespeare and the Beatles Join Forces in "As You Like It" 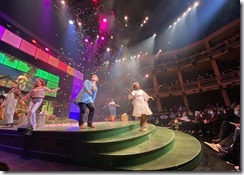 William Shakespeare's "As You Like It" is a silly, farcical play about Rosalind - a young girl in exile who dresses as a man and advises young Orlando - also in exile - on how to woo and win the woman he loves. The twist is that Rosalind is the woman with whom he is in love. Among the many subplots: Rosalind’s father Duke Senior has been overthrown and exiled by his brother Duke Frederick; the shepherd boy Silvius is in love with Phoebe, who falls in love with Rosalind, whom she believes is a man; and Duke Frederick’s daughter Celia chooses exile with her cousin/best friend Rosalind against the wishes of her father. It is hard to take it seriously: No one recognizes Rosalind simply because she changes her outfit; multiple couples fall in love at first sight; and the story is wrapped up very quickly with a series of coincidences and changes of heart.

But it is a fun story and the Chicago Shakespeare Theatre had fun with it. They removed some of the dialogue and replaced it with music from The Beatles. They also dressed the characters in 1960s attire and added a pro wrestling announcer.

Some songs fit really well into the storyline: the melancholy Jaques sings "Fool on the Hill" after meeting Touchstone the jester; Audrey and Touchstone - an older couple courting one another sing "When I'm 64"; Rosalind sings "You've Got to Hide Your Love Away" as she hides her identity from and love for Orlando. But mostly, we hear the many love songs written by the Fab Four, or the audience is treated to a song that fits the mood ("While My Guitar Gently Weeps" entertains Duke Senior's exiled court).

The cast was excellent, highlighted by Kevin Guhdal as both Dukes and Kayvon Khoshkam as Touchstone. They were not averse to breaking the fourth wall ("Why are we hiding?" “Because it’s Shakespeare!")

The production breathed new life into an old play. It was a pleasure to see an old story in a new light.