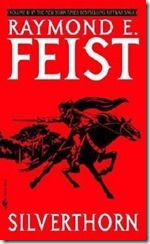 The interplanetary war has ended, the rift between the world has closed, and Lyam has been named king.

But evil forces still lurk on Midkemia and an assassination attempt on Anita, the betrothed of Lyam's brother Arutha leaves her dying from a poison-dipped crossbow bolt. Most of this book follows Arutha and his companions in their quest to find the rare silverthorn plant, which promises to provide an antidote for the poison that is slowly killing Anita.

Pug, the title character of the first two novels is relegated to a minor role until the last few chapters, when he returns to Kelewan to seek a way to battle an evil magician hoping to take over and destroy Midkemia. The journey is perilous because Pug is an outlaw in Kelewan, thanks to his disruption of the High Magicians and a powerful warlord.

Feist does a good job of keeping the action flowing and the reader engaged. This book's story is more straightforward than that of its 2-volume predecessor. It does not suffer from the weakness of the earlier volumes - having characters summarize certain events, rather than letting the reader experience them directly. We follow the characters as the action unfolds.

Silverthorn stands well on its own; but is best enjoyed as part of the Riftwar Saga. I have already begun the next book in the series.