The auditorium darkened. The music began and a small light appeared at the front of the room; then more. Students on stage danced and waved lanterns on ropes for an impressive musical light show to kick off the 2016 SpartaHack hackathon.

Students came from all over the world to attend this hackathon on the East Lansing campus. Over 200 universities were represented among the applicants. In addition to a number of international students studying on American campus, I met students who traveled to the hackathon from India, Russia, Germany, and the Philippines.

My colleague Brian Sherwin arrived in East Lansing the day before the hackathon to host an Azure workshop for 30 students - showing them how to use the cloud platform to enhance their applications. Ann Lergaard joined us a day later and we did our best to answer student questions and help them build better projects. Late Friday night, I delivered a tech talk showing off some of the services available in Azure.

Microsoft offered a prize for the best hack using our technology. It was won be 2 students who built an application that allowed users to take a photo of text with their iPhone and, in response to voice commands, read back any part of that text. The project combined Microsoft's Project Oxford OCR API with an Amazon Echo and its Alexa platform, an iPhone app, and a Firebase database.

A couple other cool hacks were:

A hackathon is an event at which students and others come together and build software and/or hardware projects in small teams over the course of a couple days. I attend a lot of hackathons and SpartaHack was one of the better organized that I've seen. Over 500 students spent the weekend building a wide variety of impressive projects - often with technology they had not touched prior to that weekend. The organizers also did a great job of providing fun activities beyond just hacking. A jazz band and a rock band each performed a set for students to enjoy during a break; a Super Smash Brothers tournament was scheduled; and a Blind Coding Contest challenged students to write code without compiling or testing to see if it would run correctly the first time in front of an audience. 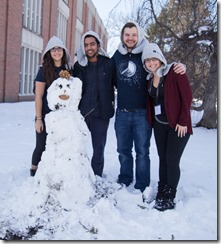 As sponsors of the event, we tried to provide some fun as well. We gave away prizes for building a snowman and for tweeting about open source technology. We also provided some loaner hardware for students; and we spent a lot of time mentoring students, which resulted in a lack of sleep this weekend.

The MSU campus has changed a great deal since I earned my undergraduate degree there decades ago. It has even changed since my son graduated from there 4 years ago. But it still felt like a homecoming for me.