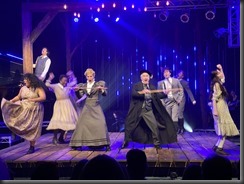 This is the story of a group of young people at a restrictive school in 19th-century Germany. Most of them have been mistreated by adults in their life, including their parents and they bear the scars of this mistreatment.

Local Chicago company Porchlight Theatre produced an excellent rendition of this musical at the Ruth Page Center for the Arts in Chicago's Gold Coast.

The play focuses on Melchior (played by Jack DeCesare) and Wendla (played by Maya Lou Hlava) - two star-crossed lovers struggling to find their identities without the benefit of role models.

But Quinn Kelch steals the show as Moritz, a marginal student driven to despair by the thought of failing out of school. His wild-eyed neuroses and magnificent voice energized the show. Early in the play, Moritz surprises the audience in the middle of a mournful soliloquy when he pulls a microphone from his schoolboy uniform, jumps up on a chair, and launches into the rebellious anthem "Bitch of Living". The rest of the cast joins in, taking turns railing against their maltreatment or announcing their angst and sexual frustration.

The show is full of surprises. The same two people play every adult role: Michael Joseph Mitchell for the men and McKinley Carter for the women. The context and some slight costume changes make it clear who is who.

The music takes the audience on an emotional roller coaster, swinging from anger to sadness to hope.

This was a low-budget production staged entirely with local actors, directors, and staff. It lacked the sets and glitter of a Broadway show. The focus was entirely on the story and the characters. I was moved by it.