Squeeze is Still Cool to us Cats 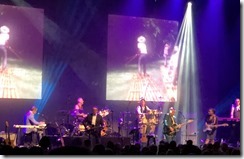 Glenn Tilbrook celebrated his birthday with us in Chicago.

Tilford - along with Chris Difford - are the driving force behind the band Squeeze. Squeeze began as a New Wave band in the late 1970s, but progressed to become one of the most creative bands of the early 1980s - producing some very inventive melodies, rhythms, and arrangements. Difford and Tilbrook were the founders, songwriters, and leaders of the band and they are the only two original members to remain with the group today.

Saturday night at the Chicago Theatre, they were joined by a very good backing ensemble, especially a drummer, filled with kinetic energy and a masterful keyboard player.

From the moment they walked on stage, they were focused on the music. The band played four songs before they paused to greet the audience.

Mixed in with some lesser-known album cuts, the band played many of their hits, including "Annie Get Your Gun", "Cool for Cats" (a rare Difford vocal), "Goodbye Girl", and "Up the Junction". Highlights of the evening included an acoustic version of "Tempted" and a rousing version of "Black Coffee in Bed" to close the night.

The seats at the Chicago Theatre were a little too close to allow any pogo dancing; but the audience got on their feet when they recognized a song. 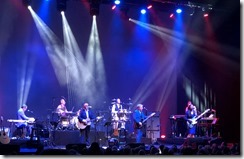 During their heyday, Squeeze was moderately popular on American radio stations, while they enjoyed much greater success in their native UK and on my college dorm room stereo.

At the end of the show, Difford wished his friend a Happy Birthday, showed a video from back home, and led the crowd in singing "Happy Birthday".