"Starship Troopers" by Robert A. Heinlein 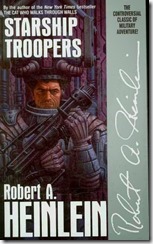 Starship Troopers by Robert A. Heinlein a science fiction novel without much science. It is the story of earth fighting a war against bug-like aliens from another galaxy, but there are very few battle scenes. It describes a future Earth ruled by a military government, but this fascism is never questioned.

It's primarily the story of Johnny Rico, a rich earth kid, who decides to enlist in the Mobile Infantry against his father's wishes.

It's mostly a coming-of-age story for Johnny, who learns discipline, strength, duty, and courage while being indoctrinated into the armed forces.

The novel has sparked controversy for its praise of the military and for its casting the aliens as dehumanized invaders - much as Americans have dehumanized foreigners against whom they fought. I don't know about that. One should consider that the book was written and released before the social upheaval of the Vietnam War and the before the Civil Rights movement was widely covered; and Heinlein drew from his own experiences in the US Navy.

I do know that I liked Johnny. I felt for him when his mother was killed in the war; and identified with his struggle and reconciliation with his father.

And there is some good science - in particular, the powered armor worn by the soldiers that enhances the strength, information, and abilities of its wearer. This idea has been borrowed by countless other science fiction authors and by military organizations.

If you are looking for an enjoyable, quick read with a bit of action and sci-fi and a solid leading character, you could do worse than Starship Troopers.