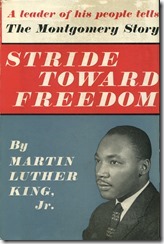 In 1954, 25-year-old Dr. Martin Luther King, Jr. moved to Montgomery, AL to lead a small Baptist Church. Alabama of the 1950s was known for embracing "Jim Crow Laws" - which enforced racial segregation by bogusly claiming "separate but equal" services.  Among these laws were rules giving preference to white passengers on public buses.

In 1955, King helped organize a boycott of the Montgomery bus system after Rosa Parks was arrested for refusing to give up her seat for a white passenger. The protest lasted for over a year and ultimately resulted in the U.S. Supreme Court ruling that the segregation laws of Montgomery were unconstitutional.

Stride Toward Freedom: The Montgomery Story, Dr. King gives his firsthand account of the historic boycott. It is a moving story of strength and prejudice and perseverance and hatred and solidarity and bigotry.

The white establishment in Montgomery fought to end the boycott and to defend their segregationist laws. The protest was noted for embracing King's philosophy of Non-Violent Resistance, encouraging local blacks not to respond to white violence and threats of violence with violent acts of their own.

In between King's narrative, he describes how he came to his Non-Violent Protest philosophy, what it means, and how it could be effective. King embraced similar philosophies promoted by Jesus Christ and Mahatma Gandhi.

Ultimately, the Montgomery boycott was successful because of the U.S. court system, which took a position based more on fairness and constitionality than on maintaining the status quo.

King concludes this book by taking stock of where the country was regarding race equality following the events in Montgomery. He notes that equality is a national - not a regional - issue and he calls out many who were not doing enough, including the President, Congress, and people in both the North and the South.

I was struck by how little the boycott organizers demanded from the city (they did not ask to end segregation) and how forcefully the local police harassed the protestors (volunteer cab drivers were detained and those waiting for rides were arrested for loitering). It is unlikely that change would have taken place in Montgomery without the intervention of the Supreme Court.

Stride Toward Freedom is an excellent history of one of the most significant events of the U.S. civil rights movement. But it is also an inspirational story of what a small group of very determined people can do to change the world when they know they are right.

The United States has made progress since 1954. But we still see the ugly specters of racism and bigotry today.