Throughout this past semester, teams of Purdue University students built projects with controllers, circuit boards, and other hardware. On Friday May 1, the teams gathered at Wang Hall on Campus to show off their finished projects. I was invited to be one of six judges to select the best projects.

I got to see some amazing projects. For example:

Much of the funding came from General Motors, but Microsoft Recruiting sponsored as well.

I didn't see a lot of Microsoft technology but I saw some very clever ideas for both hardware and software.

This was the first Spark Challenge and the organizers were confident that it was successful enough to justify planning more.

Overall it was a great opportunity for me to see the potential of these college students. 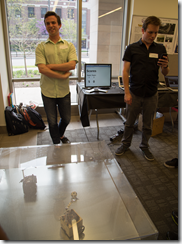 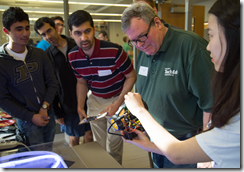 A car that follows a beam of light

The winners are announced