Teatro ZinZanni is a Different Kind of Variety Show 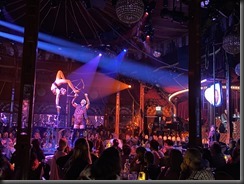 I have been to circuses and concerts and restaurants and theater, and dinner theater and improv shows and drag shows.

Thursday night at the Cambria Hotel in Chicago's Theater District, I experienced Teatro ZinZanni, which combined all of these into a single evening performance.

I had heard good things about this show but an announcement that it would close in two days was the motivation I needed to buy Friday evening tickets.

At center stage was a cross-dressed oversexed giantess, who shamelessly teased and flirted with the audience, driving the show forward. He/she was funny and crass and over the top. 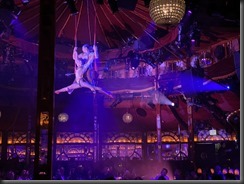 But in between, we heard excellent singers backed by a top-rate band and jugglers and acrobats and trapeze artists. The trapeze artists were the most impressive to me.

In between these, cast members ran among the tables in elaborate costumes interacting with the audience.

In between these, we enjoyed a very good dinner.

I did not know what to expect, but the show entertained us greatly.

Teatro ZinZanni has left Chicago to begin a run on the west coast. But the theater will reopen with Cafe Zazou in September. I think I know what to expect from this show.