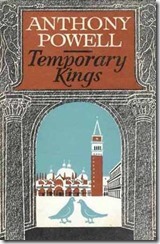 Temporary Kings is the penultimate book in Anthony Powell's epic 12-volume series A Dance to the Music of Time and covers the end of the 1950s - 10 years after the preceding novel - Books Do Furnish a Room.

Book 10 introduced - then killed off writer X. Trapnel. But he lives on in "Kings". Two new characters - both American - want to tell his life story. Scholar Russell Gwinnett is researching a biography of X; and film producer Louis Glober wants to make a movie about X's life.

Narrator Nick Jenkins and those around him are getting older and some pass on, but those who survive retain and evolve their core personalities. One character observes that "...growing old’s like being increasingly penalized for a crime you haven’t committed."

The Widmerpools return. After losing re-election to the House of Commons, Kenneth is granted a Lordship to continue his social ascendency. But he is still married to the awful Pamela, who becomes even more terrible than she has in the past. Kenneth is accused of spying and Pamela is accused of killing her lover and these accusations are addressed in a rant by Pamela near the end of the story.

The revelations near the end are atypical of this series, which heretofore tended to favor character development over plot twists. The latter events are foreshadowed by a painting observed earlier in the novel.

Thanks largely to the ending, this was one of the more entertaining books in the series.