The 90s Return with "Cruel Intentions" at the Chopin Theatre 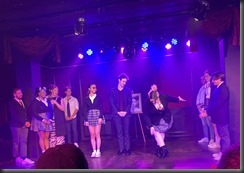 "Cruel Intentions: The 90s Musical" is a play based on a movie I never saw, which is based on a book I never read. I did not know what to expect.

In preparation to see the live show at the Chopin Theatre Saturday evening, I watched the 1999 movie on Friday. I was underwhelmed by the campy dialogue and mediocre acting, despite the presence of stars Reese Witherspoon and Sarah Michelle Gellar and semi-star Ryan Phillipe.

But the things that brought down the movie worked in the live production. The musical version took itself far less seriously than the film, making the campy dialogue seem more appropriate, often gaining an audience laugh where the same line inspired an eye roll while watching the movie.

"Cruel Intentions" is the story of Sebastian Valmont and Kathryn Merteuil – entitled step-siblings enrolled at an exclusive prep school in Manhattan. They are so privileged and amoral that they place a bet on whether Sebastian can deflower the virginal daughter of the school's new headmaster.

Manipulation, false promises, and general sociopathy ensue; but all this is interrupted periodically by cast members bursting into hit songs from the 1990s. In the stage version, the plot takes a back seat to the music. Feeling confused or angsty? Sing REM's "Losing My Religion"; Feeling sexy? Belt out Marcy Playground's "Sex and Candy"; a little self-hate can be expressed with a raucous rendition of Garbage's "I'm Only Happy When It Rains"; Use the Back Street Boys' "I Want it That Way" to flirt. The lyrics do not always fit the situation exactly, but the mood does. And somehow it works.

It works because the cast has fun with it. And so did I.