"The Acceptance World" by Anthony Powell 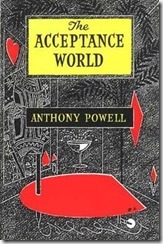 The Acceptance World is the third novel in Anthony Powell's epic A Dance to the Music of Time series.

Narrator Nick Jenkins has progressed somewhat in his career and has even written (but not published) a book.

We get a bit of mysticism (a fortune teller and a séance), a bit of politics with Quiggin expressing his Marxist views, and a bit of economics with Widmerpool's long-winded speech on the topic.

And we get numerous marriages and divorces - a sign of the fast times of the Jazz Age in England. But the Jazz Age has passed, and 1930s England is experiencing the upheaval of worldwide economic depression and the spread of new political ideas.

This novel reveals more of Nick than the first two and he finally connects with Jean Templer - sister of his school friend Peter - even though Jean is married to someone else.

The first quarter of the series is now complete. I don't know if Powell planned it this way, but the first three volumes are sometimes referred to as "The First Movement", as if the entire series were a symphony; or as "Spring" to separate Nick's life into four seasons.