"The Adventures of Augie March" by Saul Bellow 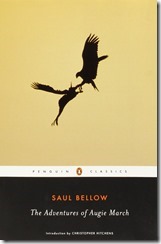 Augie March is an unlikely and unassuming hero in an American saga.

Born of a working-class simple-minded single mother in depression-era Chicago during the Great Depression, Augie struggles to rise above his lot in life.

Saul Bellow chronicles his struggles in The Adventures of Augie March.

Augie March begins his way in the world as a small-time criminal - stealing books,

Self-described as "an American, Chicago born", Augie often drifts through life, finding work where he can and seeking love where he can. His adventures often occur because he follows others: He falls in love with a girl who takes him to Mexico to finalize her divorce and train an eagle; he accompanies a friend on a trip to smuggle workers into the US from Canada, but they become stranded when the police discover the friend is driving a stolen car.

But, Augie progresses. He travels the world and experiences life and meets a lot of people. He takes on a number of jobs: Running errands for a corrupt businessman; recruiting workers to a labor union; buying and selling on the European black market; eagle trainer; even a stint in the US Navy;

Our hero's great hindrance is his desire to do the right thing. For example, his engagement to a rich girl is derailed when he helps a friend escape an abusive relationship and recover from a botched abortion. Augie's fiancé and her family refuse to believe he is not sleeping with the girl he is helping. He knows this will happen, but he does what he believes is right.


chaos.
It's sometimes hard to tell where the story is going. There are so many characters and so much happens that the reader can't always see what is important. March seems to just travel through life experiencing his adventures, with little or no theme running through them all. He tries, and he fails, and he tries again - in his careers and in his romances. Repeatedly, he deals with the chaos that is life and moves on.