"The Blind Assassin" by Margaret Atwood

"Ten days after the war ended, my sister Laura drove a car off a bridge. The bridge was being repaired: she went right through the Danger sign. The car fell a hundred feet into the ravine, smashing through the treetops feathery with new leaves, then burst into flames and rolled down into the shallow creek at the bottom. Chunks of the bridge fell on top of it. Nothing much was left of her but charred smithereens."

Iris was the daughter of wealthy industrialist in a small Canadian city. She and her younger sister Laura grew up in a small Canadian town with their widowed father and their housekeeper, until Iris's arranged marriage at 18 years to an ambitious businessman twice her age. 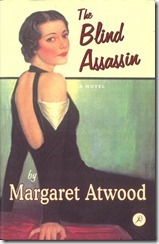 That is all gone now. Iris is an old woman telling the story of her life and her abusive marriage and her sister's suicide and her lost family.

Margaret Atwood's "The Blind Assassin" is a complex story, narrated in a nonlinear fashion by octogenarian protagonist.

The story unfolds through Iris's writing, through newspaper clippings, through letters, and through the allegories of the embedded stories. Iris's tale jumps around in time and the book often cuts to Laura's novel and back again. This complexity allows Atwood to slowly reveal the tragedy of family. Through her reflections, Iris peels away the layers of a story to slowly reveal what drove her sister to take her own life.

Her reflections reveal her feeling of guilt and the regrets she carries.

I read this novel over a weekend - fearing that if I set it aside for long, I would lose the many threads balancing in my head.

When I finished, I was exhausted.