The Bloody Crown of Conan is the second volume in Del Rey's 3-volume set of the complete Conan stories by Robert Howard. While volume 1: The Coming of Conan the Cimmerian included mostly short stories, this book contains 3 longer works: The People of the Black Circle; The Hour of the Dragon; A Witch Shall Be Born. 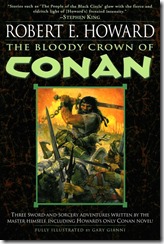 The Hour of the Dragon is a full novel that takes Conan across many countries of the Hyborian world. It is set in a time when Conan has risen to be king of Aquilonia. Conan's enemies resurrect a dead spirit to enchant the king and steal his throne. Conan's quest to regain the crown leads him across much of the known world, where he fights numerous bottles and raises an army to retake Aquilonia. The action and the epic sweep of this story make it one of Howard's best and enhances this collection.

The other 2 novellas, while not as long or involved as The Hour of the Dragon are more complex than most of Howard's short stories.  By this point in his career, Howard seems to have hit his stride. The action flows freely, if violently, and we can enjoy the adventures of Conan who uses his nearly superhuman strength and skills to overcome nearly impossible odds.

The collection ends with a few uninteresting first drafts of Howard's unpublished Conan stories, followed by a fascinating essay analyzing the themes of the Conan series and the evolution of the character.

For escapism and adventure, it is difficult to beat these stories.