"The Book of the New Sun" by Gene Wolfe 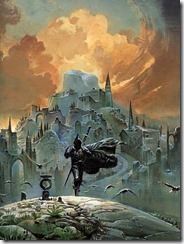 I finished this 4-volume set a couple weeks ago.

The story takes place a million years in Earth's future. The sun is dying.

The Earth - now called "Urth" - has resorted to a medieval society, but it still retains remnants of its forgotten technology. For example, man no longer can travel between the stars, but old spaceships are repurposed as buildings and alien life forms exist on Urth.

Severian is an apprentice to the Torturers Guild, which is charged with carrying out punishment and interrogations ordered by the state. Early in volume 1, the Guild exiles Severian for the crime of showing mercy to one of the their prisoners.

This sets Severian on a long quest across Urth, to discover himself and his purpose in the world. He reveals early in his narrative that he ultimately becomes emperor of the planet.

Many of his companions meet tragic ends; but Severian ventures on.

I'm unclear if magic exists in this world or if technological advances of the previous millennia are indistinguishable from magic.
For example, Severian possesses a stone - The Claw of the Conciliator - that appears to have the power to raise the dead. But it's unclear of the risen dead were only in a long state of suspended animation and the stone has some healing attributes that won't be discovered for millennia after our time.

The story is narrated by Severian himself and, although he claims to have a perfect memory, we see enough evidence to the contrary that we begin to distrust his version of the events he relates.

Almost without exception, those who love The Book of the New Sun have read it multiple times. People who disliked the book found it confusing. And that is understandable, because it is confusing. The plot is complex and the action shifts quickly; questions arise and are not answered for hundreds of pages - sometimes without reference to the original question and sometimes not at all; many characters enter and exit the narrative and they may or may not re-appear much later in the story.

I think the tetralogy requires multiple readings to discover the nuances and symbolism of the story. I have only read it once, but I may return in a couple of years. At that time, I will also likely revisit this review.