"The Bridge of San Luis Rey" by Thornton Wilder 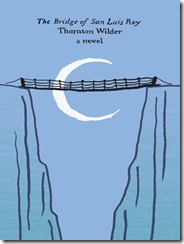 In 18th century Peru, Brother Juniper was out for a walk when he witnessed the bridge collapse, sending 5 people plunging to their death in chasm below. Why these people?, he wondered. Was there something about them that destined them for this tragic end? Was their death random chance or part of a divine plan? Why was I spared?

"Some say that we shall never know and that to the gods we are like the flies that the boys kill on a summer day, and some say, on the contrary, that the very sparrows do not lose a feather that has not been brushed away by the finger of God."

He spent years investigating - to learn about the five victims.

There are no heroes or villains here - just people living their lives and loving one another and fighting one another. The three sets of victims did not know one another, but their lives were connected through their interactions with others.

The lives of the five people yield no clue as to why they were selected for death on this day and no clarity on God's plan.
Brother Juniper is ultimately punished for even asking his questions.

Thornton Wilder's The Bridge of San Luis Rey is a brief, simple story that brings the reader into the interconnected lives of the characters. We see how they struggle with loss and how they deal with grief. We witness the cruelty of the world as events beyond their control affect their lives.

It is this and the beauty and subtlety of Wilder's prose that won this novel the 1928 Pulitzer Prize.

The book does not answer Brother Juniper's questions about God's plan, but it does offer a message on the meaning of life:

"Soon we will die, and every memory of those five will disappear from the earth, and we ourselves will be loved for a short time, and then forgotten. But love will have sufficed; all those motions of love return to the Love that created them. Not even memory is necessary to love. There is a world of the living and a world of the dead, and the bridge is love, only survival, the only meaning"