"The Confessions of Nat Turner" by William Styron 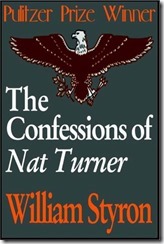 Sometimes a novel with very few facts can contain a lot of truth.

The Confessions of Nat Turner by William Styron was written in 1967 and was inspired by a slave rebellion 136 years earlier.

In August `1831, Virginia slave Nat Turner led a rebellion that killed 55 white people in southeast Virginia. Turner, was captured, confessed to the crime, and was executed. He claimed that he did what he did because he was directed by God.

Almost nothing is known about Turner, other than the documents pertaining to his arrest and trial. So, Styron attempts to recreate his life - not by researching historic records and biographies - but by hypothesizing how an educated black slave could come to lead such a rebellion. The result is far from accurate in a personal sense, but very real in relating the conditions of slavery and the relationships between slaves and masters in the antebellum U.S. south.

Very little in The Confessions of Nat Turner is true. Styron takes liberties with the day-to-day activities and with Turner's thoughts. But it rings true, because so many of Nat's reactions spring logically from a lifetime of being treated as property.

The hypothetical Nat of the novel is originally owned by a man who treats his slaves better than most slaveowners do. He believes in the potential of blacks, ensures that Nat receives and education, and even makes plans for Nat to serve an apprenticeship in Richmond and ultimately earn his freedom. But these plans of freedom are abandoned when a failing economy forces the owner to sell off some of his slaves, including Nat. This broken promise underscores the unfairness inherent in the institution of slavery. An owner may speak to his slaves with respect and refuse to beat them; but, ultimately, a slave was a possession the owner may do with what he wishes with that possession. Virginia law fully supported this inequity.

Nat passes to several more masters - some more cruel and some less so. Overall, his life is better than most American slaves of the time, but he has lost the hope of freedom that was promised to him, and he is left facing a lifetime of servitude. Nat's strong faith in God helps to sustain him, so he begins to preach to other blacks in the area and soon gains a following. When he is finally inspired to emancipate his fellow slaves, he enlists this following to help him execute his plan.

Some critics claim that Styron's skin color prohibits him from making any assumptions or writing about a black slave - particularly writing in the first person, as he does in this novel. But Styron does a good job of humanizing the mysterious Turner and of shining a light on the dehumanizing institution of slavery.