"The Corrections" by Jonathan Franzen 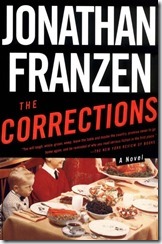 Jonathan Franzen's 2001 novel "The Corrections" tells the story of a family that has lost its way. Alfred and Enid Lambert still live in their home in Iowa, but their three adult children have moved to New York and Philadelphia. The children initially enjoyed some success, but each has fallen hard in recent years.

Oldest son Gary has achieved financial success as a banker but is trapped in a loveless marriage in which he and his wife consistently torture one another emotionally. He struggles with alcoholism and depression.

Chip was a college professor until he was fired for sleeping with and then stalking one of his students. He tries to pull himself out of debt by assisting a corrupt Lithuanian politician scam people via the Internet.

Denise’s career as a famous chef is undone by a disastrous affair.

Patriarch Alfred is a retired engineer for a Midwestern railroad. His entire life, he has been hard-working and independent and in control. But Parkinson's and Alzheimer’s are now robbing him of that control.

Matriarch Enid tries desperately to keep her family together, inviting everyone home for "one last Christmas", while she tries to care for Alfred. Enid is easily the most sympathetic of the family. Her marriage to the emotionally unavailable Alfred has been unsatisfying, but she stayed with him; and her adult children have all but abandoned her, but she still loves them. Still, her efforts to control the lives of everyone in the family and heap guilt on her children prevent the reader from admiring her too much.

This novel grabbed me early and held me throughout. Franzen introduces each family member, shows or hints at their current problems - then takes us back in time to show us how they fell to where they are now.  He gradually reveals their lives and characters and motivations, and the fatal flaws that toppled them. Each character lives in denial of the seriousness of their problems. Each major character is damaged, but each has enough redeeming qualities that the reader pulls for them. They seemingly cannot resist acts of self-destruction.

Even the minor characters are interesting. I loved the neurotic Robin, who blamed herself for the violence chosen by her sociopath brother. And the pill-pushing cruise ship doctor reminded me of a used car salesman and had me laughing out loud. These characters exist to reflect the Lambert family, but Franzen took the time to give them shape, without distracting from the main story.

The Corrections is humorous and absurd and touching and tragic; and in the end, as the characters each experience their corrections, gives us hope for the future.