"The Crying of Lot 49" by Thomas Pynchon 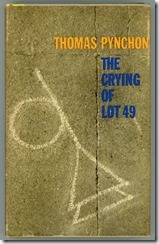 Oedipa Moss's life was uncomplicated until her former lover - millionaire Pierce Inverarity - passed away and she was named the executor of his estate.

She said goodbye to her husband Mucho Maase and traveled to San Narciso, CA to investigate Pierce's assets.

During her investigation, she encountered a plethora of bizarre characters with bizarre names (Dr. Hilarius, Genghis Cohen, Mike Fallopian, Stanley Koteks, …), along with an ancient secret society dedicated to providing an alternative mail delivery system, to break the monopoly of the U.S. Postal Service.

The Crying of Lot 49 by Thomas Pynchon is an absurd, satirical novel with a huge number of twists, considering its brief length.

On the surface, this is a detective story; but it leaves most questions unanswered and most mysteries unresolved.

Its strength is in its humor and in the creative way it bounces Oedipa from one situation to the next.

The story includes the following:

A lawyer happens to be a former child star with the stage name "Baby Igor". He seduces Oedipa by feeding her tequila and playing strip baccarat while one of his old movies plays on the TV.

Oedipa's psychiatrist is intent on providing hallucinogenic drugs to his patients and ultimately reveals his Nazi past during a violent, paranoid, nervous breakdown.

An American rock band dresses like the Beatles and sing all their songs with a British accent.

And the story of the secret society, rebelling against the government by subverting its monopoly of the postal system keeps coming back to the front. It seems such a bizarre form of protest. But appropriate to this novella.

The novella makes up for its brevity by packing a great deal of quirkiness into less than 200 pages.