"The Crystal Cave" by Mary Stewart 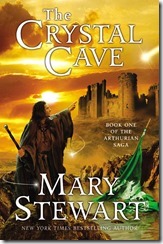 Unlike most books on this topic, this is the story of young Merlin - the bastard son of a Welsh princess, who discovers he has visions that predict the future or reveal events happening far away.

The Merlin of The Crystal Cave is more human than the one we encounter in most Arthurian stories. Here, Merlin has no powers other than his vision, a keen mind, and a solid education. But he uses these powers to become advisor to kings and to influence the coming of Arthur.

This book is a coming of age story in which young Merlin meets his first mentor, discovers his birth father, and searches for his place in the world. It is set against the backdrop of fifth century England, after the departure of the Romans and before the unification of Britain under a single king. As such, it is also an adventure story. And Stewart tells the adventure well, expertly building the character of Merlin and those he encounters.

Mary Stewart originally won fame as a writer of romance novels; but this departure from her familiar genre was a great success. The Crystal Cave offers a fresh take on an old story. I enjoyed it enough that I plan to read the sequels in this series.