"The Day of the Locust" by Nathanael West 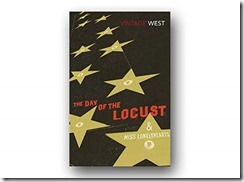 Nathanael West's The Day of the Locust takes place in 1930s Hollywood; but it has little to do with the film industry. This even though the book opens with a parade of movie extras marching past and ends with fans rioting outside a movie premiere.

Most of the story takes place around the edges of movie life. Tod Hackett works as a set painter for a movie studio and Faye Greener is a sometimes extra, waiting for her chance to be a star.

Tod is infatuated with Faye, but Faye cares only for herself and uses Tod, along with every man who comes into his life. Some of the men she teases, some she sleeps with, and some she exploits. She particularly takes advantage of Homer Simpson (Yes. Homer Simpson), a shy, repressed Midwesterner who comes to California hoping the mild weather will heal his failing health. After the death of her father, Faye moves into Homer's house and invites her lover and his friend to move into his garage, where they host illegal cock fights. She is verbally abusive to all her suitors, but she is cruelest to Homer.

The Day of the Locust shines a light on the shallowness of Hollywood culture. As Hackett tells it, people "have come to California to die". The pleasant weather isn't enough to occupy them, and they don't have enough money or imagination to fight the inevitable boredom that overwhelms their lives. So, everyone devolves into a shallow version of themselves.

No one seemed to be working toward anything meaningful. Tod is complex ("a very complicated young man with a whole set of personalities, one inside the other like a nest of Chinese boxes); but everyone he encounters is a simple stereotype from the ill-tempered dwarf to the silent cowboy to the mother pushing her spoiled son to be a child star. It's no wonder that so many of them fall for Faye's empty charms.


This book is satirical and depressing and filled with sexual frustration, which leads to heartbreak, which often leads to violence.

And I liked it.