“The Elfstones of Shannara” by Terry Brooks 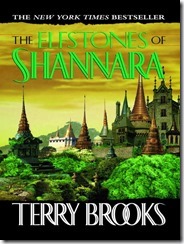 The Elfstones of Shannara is the second book of Terry Brooks’s Shannara series.

It begins years after The Sword of Shannara. The magical Ellcrys tree - created by the elves millennia earlier to imprison the evil demons - has begun to die, allowing the demons to regain their strength and attack men and elves.

Wil Ohmsford - grandson of Shea Ohmsford, hero of the first novel - is assigned the task of re-planting the Ellcrys. He needs the help of the elven princess Amberle, who is chosen to protect the magical tree, but has run away from her king and family. To protect her on his quest, he uses the power of the mystical elfstones left to him by his grandfather.

It becomes a race for Wil and Amberle to find the hidden Ellcrys seed and restore the Ellcrys before the emboldened demons attack and destroy men and elves of the Four Lands.

Terry Brooks knows how to tell a story, but it troubles me that he borrows so much from JRR Tolkien. It's not just that his world is populated with elves and dwarves. Major parts of the story are lifted directly from Tolkien. The young, reluctant hero goes on a quest to save the world from evil creatures, armed with a magical talisman that was left to him by an older relative, who went on a similar quest in an earlier book. We could easily substitute Bilbo, Frodo, and the Ring for Wil, Shea, and the Elfstones.

But, the stories are entertaining if not told with Tolkien's magic. It's a good introduction to the world of fantasy for those who want something more accessible than Lord of the Rings.