The Fabulous Thunderbirds are Tuff Enuff for Chicago 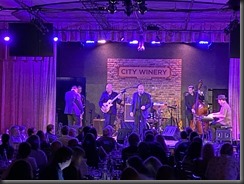 The Fabulous Thunderbirds know the blues.

Monday evening at the City Winery, they delighted the audience for two hours, moving seamlessly from jump blues to boogie-woogie to rock & roll to slow burn songs like Charles Brown's "Black Night" to funky songs like their 1980s song "Wrap It Up".

The band formed nearly five decades ago in Austin, TX. Lead vocalist Kim Wilson remains the only constant member, but the current lineup still brings strong energy and technical chops to their performance. Bob Welsh's energetic solo on "Slow Down" - a Larry Williams song made famous by The Beatles - was outstanding, as were Jerry Weldon's saxophone solos and Dean Shot's guitar solos on multiple songs.

In all those years, their only US Top-40 hit was "Tuff Enuff", which peaked at Number 10 in 1986 and which they played as the penultimate song of the evening. But the group continued to tour, and it is their live performances that drive the band and their fans. I saw them at a festival in Detroit in 1989 with Jimmie Vaughn on guitar. The names and faces have changed but the energy remains high.

The club Monday night was barely half full, but those who attended enjoyed it. A couple at the table next to mine appeared to be in their 70s or 80s but spent much of the evening dancing.

The show's opening was delayed as Weldon had trouble locating the microphone for his sax; but it closed with a strong harmonica solo by Wilson that brought the audience to its feet.