"The Fellowship of the Ring" by J.R.R. Tolkien 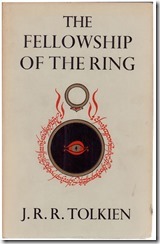 On his eleventy-first birthday, hobbit Bilbo Baggins decided to leave Hobbiton. He did so in dramatic fashion, literally disappearing while giving a speech at his birthday party. Bilbo left most of his belongings to his nephew Frodo, including a magic ring he discovered on a journey years earlier.

Neither Bilbo nor Frodo nor the wizard Gandalf knew that the magic ring was cursed. It was created by the evil Sauron, who has returned to take over all of Middle Earth and who desires the ring's power, which will virtually guarantee his success. When Sauron's minions The Ring Wraiths arrive in the Shire seeking the ring, Frodo and his friends flee, traveling across Middle Earth to Rivendell - a city of elves, where Bilbo has been living. At Rivendell, the wise elves decide that the only way to prevent the ring from falling into Sauron's hands is to destroy it. Sadly, the only way to do this is to throw it into the fiery pits of Mount Doom, located far away in the Mordor - home to Sauron.

So, Frodo sets out for Mordor with his 3 hobbit friends, Gandalf, Gimli the Dwarf, Legolas the elf, and two men: Aragorn and Boromir. Along the way, this "fellowship" is beset by treacherous terrain, fierce monsters, and the betrayal of a friend.

The Fellowship of the Ring begins J.R.R. Tolkien's classic Lord of the Rings trilogy.

It takes place a few years after The Hobbit, in the same world with many of the same characters. But it is much darker in tone.

Tolkien is at his best when he is building a world. By the end of the story, we know the beings who populate Middle Earth, the lands in which they live, the languages they speak, and much of their history. Fellowship is an adventure story, but the action is often interrupted by detailed descriptions of the environment. Those who know the story only through Peter Jackson's excellent movie may be disappointed that the book does not advance as fast.

But the depth of detail provided by Tolkien more than makes up for any pacing issues. The reader feels that he knows this world and these characters and why the ring is so important.

He mixes in much poetry or songs with his work, some of which is quite good. The prophecy of the Ring is told with the following poem:

"All that is gold does not glitter,
Not all those who wander are lost;
The old that is strong does not wither,
Deep roots are not reached by the frost.
From the ashes a fire shall be woken,
A light from the shadows shall spring;
Renewed shall be blade that was broken,
The crownless again shall be king."

And some of Tolkien's writing just sounds epic in its prose: "One Ring to rule them all, One Ring to find them, One Ring to bring them all and in the darkness bind them."

Although listed as volume 1, this is not as much a first book in a trilogy as it is the first chapters in a very long novel, published in 3 volumes to make it easier to consume and market. You should read this volume knowing full well that it is not a complete story: You are committing to the entire series.

And a wonderful story it is.