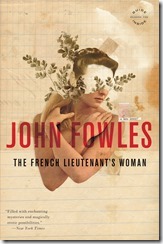 Charles Smithson was a member of England's upper class in Victorian England. He was wealthy to the point of being idle rich and poised to inherit a title and fortune from his bachelor uncle. He became engaged to wealthy Ernestina Freeman, who is pretty, but simple and self-centered.

Everyone in the small, seaside town of Lyme Regis believes that Sarah Woodruff is mad. She spends her days, staring at the sea, waiting for the return of the French officer who jilted her years before.

Smithson's future seems set, until he meets the Sarah and takes an interest in her tragic paste.

At first glance, it seems a classic love triangle with a gentleman forced to choose between the lady to whom he is promised and a fallen woman. But Sarah is not what she seems, and everything becomes more complicated.

The reader is given clues about Sarah's motivations, but we never fully understand her actions. On the other hand, Fowles explores Charles in depth - his prejudices and his frustrations and his fears and his flaws. We follow him on his path of self-destruction, and weep for his arrogance of thinking he is benevolent toward Sarah by treating her (sometimes) as a human being.

We are shown other characters, very few of whom are likeable. They display hypocrisy and dishonest and spoiled and are almost universally self-serving.

Fowles has no qualms about injecting himself into the story, reminding the reader that he controls the actions of the fictional characters. He cuts in with long asides about the differences between sexual attitudes in the 19th and 20th century; or the life of Thomas Hardy; or the role of a writer in a novel. It's a risk; but, for the most part, he pulls it off, thanks to his cleverness and excellent prose. This only becomes an issue when he presents multiple possible endings to the story, which struck me as a cop-out.

Despite this weakness, The French Lieutenant's Woman by John Fowles is a very good story that will make you think.