"The Golden Notebook" by Doris Lessing 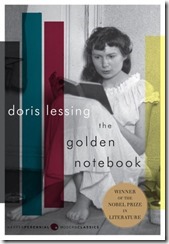 In Doris Lessing's The Golden Notebook, protagonist Anna Wulf serves as a surrogate for Lessing, expressing the philosophies and doubts of the author; And the fictional Wulf is a writer who injects herself into the Ella - the protagonist of her own novel.

Notebook tells Anna's story in a non-linear fashion, switching between a third person narrative of the life of Anna and her social circles and the contents of her four journals. The journals are organized by topic, rather by time. Anna hopes to better understand herself by writing down all her thoughts. But she recognizes the different aspects of herself and decides to capture each aspect in a separate notebook, organized (in her own words) as follows:

"A black notebook, which is to do with Anna Wolf the writer;
a red notebook, concerned with politics;
a yellow notebook, in which I make stories out of my experience;
and a blue notebook which tries to be a diary."

The book jumps around in time and in perspective, making it fragmented and sometimes difficult to follow. But it is fragmented because Anna is fragmented. She realizes she has contradictions in her life and she separates them, unsuccessfully trying to minimize her anxiety.

She struggles with her political beliefs. The idealism that led her to Communism is challenged by the corruption of the Stalin regime and her commitment to the party wanes.

She is confident and sexually liberated, but she struggles with her relationship with men, often entering into destructive relationships with men who mistreat her.

She challenges the role of women in society but allows herself to be controlled by others.

She wrote a successful novel and writes almost daily but has no interest in publishing again or allowing her novel to be adapted to film or TV.

There is a lot to absorb in The Golden Notebook. It is about feminism and politics and sexuality and control. But it works for me. And although I grew up in a different world than Anna and Lessing and Ella, I often saw myself in her and recognized her struggles.