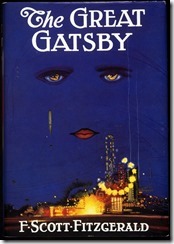 Young Nick Carraway spent the summer of 1922 in East Egg Long Island, renting a home next to the mansion of the enigmatic Jay Gatsby. A plethora of rumours about Gatsby bounced around the small community: Gatsby is the son of European royalty; he was a German spy in the war; he once killed a man.

The two men become friends and Gatsby asks Nick to help him re-connect with his former lover Daisy Buchanan, who is now trapped in a loveless marriage.

There are many reasons why F. Scott Fitzgerald's The Great Gatsby is a classic. It captures the spirit of the wealthy elite in the Jazz Age of 1920s America; it sings of lost love and unattainable love; and it is the kind of timeless tragedy that stays with the reader long after the novel is finished.

Gatsby represents the American dream of the self-made man, yet the old money of Long Island looks down on him. He cannot let go of the past, so he buys a mansion across the bay from his former lover; he throws lavish parties in the hope that she will attend. Gatsby reinvents himself; and he amasses a fortune, thinking it will win Daisy's heart and rekindle what they once had. He does not consider that Daisy is not the girl she was; or that she was never the girl he believed her to be. He is in love with a vision of her from the past - a vision that was never real.

Gatsby is likeable; Daisy's husband Tom is arrogant and unfaithful and violent. But Tom is from old money; born into a higher caste. And this makes a difference to Daisy.

It is a tragic story of the shallowness and arrogance of the financial and social elite. Gatsby idealized Daisy; in the same way, people overestimate the positive effect that money will have on their life. There is an emptiness inside so many of the characters.