"The Hobbit" by J.R.R. Tolkien 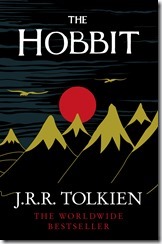 Bilbo the Hobbit was content with his life in the Shire when the wizard Gandalf showed up with 13 dwarves, who were told that Bilbo was an experienced burglar and would join them on a dangerous journey to steal back a treasure from evil dragon Smaug.

Bilbo had his reservations, but he also had a wanderlust that overcame his desire for comfort; so, he agreed to join the dwarves on their adventure. They set out across Middle Earth, battling man-eating trolls and man-eating dwarves and man-eating giant spiders before confronting the man-eating dragon surrounded by his mountain of treasure, stolen from the nearby towns he terrorized and destroyed.

The Hobbit by J.R.R. Tolkien is a delightful fairy tale of an odyssey across a magical world filled with fascinating creatures. It is a charming story in its own right, but its greatest contribution is that it introduced us to the world of Middle Earth, a mythical land that later became the setting of Tolkien's classic Lord of the Rings trilogy.

The Hobbit is much lighter than the later trilogy and can be read to and by most children. Yes, there are life-threatening dangers, but many of these are a bit silly and the party often overcomes them in humorous ways.

The story and characters of The Hobbit have become so familiar to us, that one might expect this story would become tiresome. But Tolkien never allows this. He brings us on a remarkable journey with Bilbo, where our hero is transformed from an ordinary Hobbit to an extraordinary hero.

Bilbo is short and chubby and enjoys his breakfast and his pipe far more than adventure. Yet, time and again, it is Bilbo who saves his companions from certain death. Gandalf recognizes Bilbo's potential early and puts him in a position to fulfill his destiny. Ultimately, it is the story of self-discovery for the hobbit.

Count me among the many fans of The Hobbit. I enjoyed the story thirty years ago when I first encountered it. And I enjoyed it again this week. It is not a complex tale, but it has been a source of delight for readers of all ages for generations.