"The Hollow Hills" by Mary Stewart 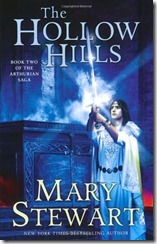 In this second volume, King Uther, hoping to avoid the shame of conceiving Arthur via Ygraine on the night her husband was killed, commits the infant to the care of Merlin. Merlin keeps the boy safe until it is time for him to become king.

Merlin places the future monarch in the care of trusted friends; then, travels across Europe, where he learns of the sword of King Maximus - a sword prophesied to belong to the rightful ruler of Britain. Merlin then begins his quest to find this sword and get it to Arthur.

In some ways, The Hollow Hills is even stronger than The Crystal Cave. It continues its focus on Merlin, but it is Merlin the man, cognizant of his destiny and responsibility that we see, and his story is compelling.

I love the very-human Merlin that Stewart creates. His only "magic" is his advanced education and his ability to (sometimes) see the future and the distant present; but that is enough to grow his legend as a powerful wizard.

I love the way Stewart brings to life the legend in a very real sense. Merlin seeks and discovers the legendary sword of a long dead king and leaves it where Arthur can find it, cementing the boy's claim to the crown of his father.

The story follows Merlin from Arthur's birth to his ascension to the throne after Uther's death. Because Arthur's story is so well known, there are few surprises; but Stewart's prose and her gift of building characters makes this an enjoyable read.