"The Jungle" by Upton Sinclair 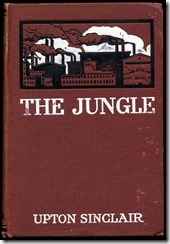 Brace yourself before reading Upton Sinclair's the The Jungle.

The Jungle tells the story of European immigrants lured to Chicago with promises of high-paying jobs in the meat packing industry. The promises of a good life turn out to be false - particularly for the family of Lithuanian immigrant Jurgis Rudkus. Jurgis arrives believing that he can handle the hard work and provide for his new wife and his extended family. He is strong and hard-working, and he quickly finds a job in the local stockyards.

But they have entered a world where the entire system conspires to keep down the poor. Wages are reduced downward and workers are not paid for time lost.

Even time lost to injury or illness.

Even injury or illness caused by unsafe and unsanitary working conditions, which is the norm in Chicago's meatpacking industry.

A dishonest realtor tricks the family into buying a home with hidden costs and his entire family must go to work to make ends meet. The meat trust exploits them all by keeping them in in unsafe and unhealthy conditions. Foremen, policemen, businessmen, judges, and politicians are all corrupt and use their power to prey on the powerless.

As time passes, the family falls farther into debt and deeper into despair. Some die, some are maimed, some are arrested, some are blacklisted by all the local companies, one is raped with impunity by her boss, and one disappears without a trace. Despite their best efforts, their fate seems almost inescapable. They work hard and play by society's rules but are cast aside anyway. Before long, the hope and optimism with which they arrived slips away.

Sinclair was a devout socialist and concludes the novel with a pitch for socialism as a cure for the dangers of unchecked capitalism. It's interesting to read this today over a hundred years after its publication and with the perspective of history. Socialism never took over the US and has produced mixed results in those nations where it was adopted.

But the novel did have an impact on society - mostly by calling attention to the unsanitary products sold by the meat packers. This led to increased regulation and the formation of what would become the Food and Drug Administration.

The preaching about socialism in the last few pages makes the ending feel a bit weak, but the story is a powerful one and I could not help but feel for the heartbreak experienced by Jurgis and his family. The reader feels both sympathy and outrage at the injustices they suffer.  There is a reason why this novel is considered an American classic.