"The Kindly Ones" by Anthony Powell 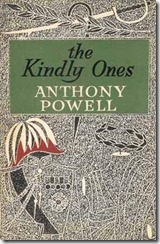 Anthony Powell's The Kindly Ones begins and ends with a prelude to world war.

The opening chapter takes us back to narrator Nick Jenkins's childhood - at the outbreak of World War I. We see a love quadrangle among the family servants that results in a nervous breakdown for one of them; a visit from Nick's Uncle Giles; news of the assassination of the Archduke Ferdinand, plunging Europe into war; and a local cult leader.

In the closing chapters, England is preparing for an entry into World War II and Nick must make arrangements for his uncle's funeral. Several characters from Jenkins's past turn up at the small town where he is arranging the funeral - remarkable coincidence, but seemingly necessary to advance the story.

In between, a group of friends attend a dinner party at the home of Sir Magnus Donner. The party turns slightly decadent as the guests pose for photographs as the seven deadly sins - a game that nearly results in another nervous breakdown.

At the halfway point of his 12-volume A Dance to the Music of Time series, Powell concludes the "Summer" cycle (or "Second Movement", depending if you accept the painting or the music metaphor for this work) and leads us into the war. One gets a sense of foreboding as the storylines take darker turns.

I liked the preludes to world war that bookends the novel, and the evolution of the characters over time.

I look forward to the second half of this cycle.