"The Last Enchantment" by Mary Stewart 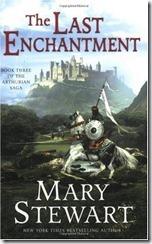 The Last Enchantment by Mary Stewart's concludes the Merlin Trilogy begun with The Crystal Cave and The Hollow Hills.

The story begins just after young Arthur's ascension to the throne of Britain. It covers Arthur's first decade as high king as he battles the Saxons and unites Britain.

But Arthur is a minor character in this novel, as Stewart focuses on Merlin, the king's cousin, mentor, advisor, prophet, and friend.

Arthur is betrayed by both his half-sisters; but we hear much more about Morgause, because she tries to poison Merlin than about Morgan, who steals the king's legendary sword.

In The Last Enchantment, as in the previous novels, Merlin's mystical abilities are never as powerful as in the familiar legend; his abilities limited to his education, his wisdom, and the ability to occasionally see visions of the present and future.  In this novel, he loses his clairvoyant power, yet retains his value to Arthur as a trusted advisor and mentor.

Despite Merlin's power and stature within the new kingdom, he shows considerable humanity. He confronts the loss of his mystical powers; He confronts his own mortality and how the kingdom will fare when he eventually passes; and he falls in love for the first time in his life. He even deals with his accidental entombment after an Morgause's assassination attempt leaves him in a deathlike state.

I loved this whole series.

I loved Stewart's ability to take a story as familiar as the Arthurian legend and make it fresh and make it her own.

I loved the way she combined the different versions  of the Arthurian legend into a coherent tale.

I loved the humanity with which she injects all her characters - even those with special abilities.

I loved the action and the politics and the romance.

I loved the relationship and loyalty between Arthur and Merlin.

I was fortunate to have discovered this series and I'm happy to have seen the trilogy through to its conclusion.