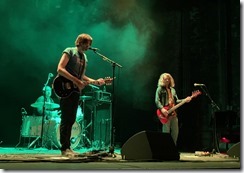 Some artists let the music do the talking for them. This was the case with Evan Dando, as he and his band the Lemonheads performed at Thalia Hall Thursday night. The band moved quickly from one song to the next with at most a quick "Thank you" between numbers.

On the one hand, this allowed them to pack as many of their 3–4-minute songs into as short a time as possible. On the other hand, it made it difficult to achieve a connection between the audience and the performers.

Don't get me wrong. The trio (Dando, along with bassist Farley Gavin and drummer Michael Jones) sounded really good. All are accomplished musicians and Dando's voice sounds as powerful now as it did when he was cranking out hits almost 30 years ago. And it's not that the band didn't have energy or that they ignored the audience. They just didn't talk to them. And the concert ended with Dando mumbling "See ya later" less than 90 minutes into his set and walking offstage with no return for an encore.

Everything was abrupt. A half hour into the show, Gavin and Jones walked off stage and Dando picked up a guitar and performed a 20-minute acoustic set, highlighted by the " I Lied About Being the Outdoor Type", "Being Around", and "Frank Mills" from the musical "Hair". Then the band returned and continued as a trio.

The band's songs are typical of the indie bands that major labels signed in droves in the late 1980s and 1990s; their songs feature catchy melodies and clever lyrics layered over driving rhythms and frantic guitars.

Even though the Lemonheads' last two albums featured only cover songs, this evening was mostly about original material. However, the trio did delight with the John Prine song "Speed of the Sound of Loneliness" and finished with "Different Drum", the  Michael Nesmith song made famous by Linda Ronstadt's Stone Poneys.

Overall, it was a good show by a quality band that tried to sound very much like they did on their albums. I enjoyed it, but it wasn't much different from listening to their albums.