"The Man Who Folded Himself" by David Gerrold 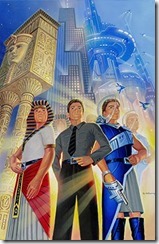 When Dan's Uncle Jim died, he left Dan one thing: a belt that allowed Dan to travel backward and forward in time. His first instinct was to use the device to make himself rich via gambling and investments.  But then, he uses it to correct mistakes - either in his own life or in history. His actions sometimes result in unpleasant side effects; but he can always go back a bit earlier and undo his "corrections". Dan has it all. His godlike powers allow him to build a life to his own suiting; and he spends most of his time with past and future versions of himself, because they are the only people he understands and who understand him.

But the world becomes confusing the more he alters his timeline. He becomes more isolated and less certain of what is reality. Eventually, he must confront the responsibility that comes with the power he has inherited.

"But when you can erase your mistakes in a minute, you tend to get careless.
Until you make one you can't."

There is a twist at the end, but it was one I saw coming halfway through the novella. But this story isn't about plot twists. It's about the character of a man who can do anything for himself - one who needs no one else.

The Man Who Folded Himself is about self-identity; and personal responsibility; and cause and effect; and what it means to have it all. And it covers these topics in a mere 116 pages. This might be the most amazing thing about the book - no small feat for a story that deals with time travel.