"The Military Philosophers" by Anthony Powell 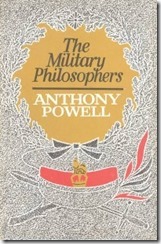 We are now at book 9. The Autumn Cycle (or the Third Movement, depending if you  are using the music or painting allegory) of Andrew Powell's 12-volume A Dance to the Music of Time.

The Military Philosophers covers narrator Nick Jenkins's life as World War II comes to a close. Although Nick remains mostly in Britain as a staff officer and never comes close to the front, he is still greatly affected by the war. He is eventually promoted to Major and he loses two of his oldest friends in the fighting, along with a longtime family friend. All the deaths appear "off camera", but they still move us as we know the history of each victim.

As always, the narrator's life is overshadowed by the lives of those around them and the events in which they find themselves. In this case, the event is the second world war and this book covers about two-thirds of it. It moves quickly and we see the change in people. Nick runs into a comrade from his first unit and is barely remembered because it was so long ago (although it was only a few years).

Kenneth Widmerpool - the ambitious former classmate, who appears in every novel of the series - continues to rise in power, eventually becoming a Colonel. But we see the dark side of his ambition, as some amoral decisions present themselves - decisions that cost the lives of others.

Near the end of the book, an old character returns who I suspect will alter Nick's postwar life.

And the author makes reference to French novelist Marcel Proust, with whom he is often compared.

I was touched by a scene in which Nick fights to secure from a General the only room with a bath because an Indian officer of lower rank needed it "for religious reasons". Nick never asks the specifics of the religion and does not try to understand it; but fights for him anyway.

Powell does an excellent job of bringing his characters together and evolving them over time; and he does a good job of conveying the weariness felt by England at the end of the war. A celebration at St. Paul's feels more like a funeral than a commemoration.