"The Moviegoer" by Walker Percy 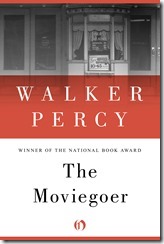 The Moviegoer by Walker Percy tells the story of Binx Bolling, a young stockbroker existing in New Orleans of the 1050s.

Binx spends most of his spare time chasing his secretaries and watching movies.

At first glance, Binx seems the shallowest of people. But he often sees the world through fresh eyes, even if he struggles to articulate these observations to those around him.

Percy takes us through life in New Orleans and Chicago as seen through Binx's eyes. He likes adventure, but he is easily bored. He loves his family, but he cannot relate to them. He cares for his cousin Kate, but not enough to protect her.

We see Binx interacting with his extended family, a remnant of southern aristocracy, who lament the changing ways of their society. We experience his relationship with Kate, who recently attempted suicide. Without thinking how it might concern Kate's parents, Binx and Kate leave suddenly for a week in Chicago, without informing anyone of their departure.

"What do you think is the purpose of life - to go to the movies and dally with every girl that comes along?", his aunt asks him? He responds "No", but the reader suspects otherwise.

One might think this is a tragic tale, but it is told in a lighthearted fashion and it ends with some optimism.