"The Ocean at the End of the Lane" by Neil Gaiman 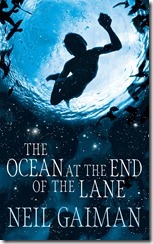 The narrator of The Ocean at the End of the Lane returns to his childhood home and is surprised by the return of repressed memories. He was a sad and lonely child; He preferred books over sports and no one came to his seventh birthday party and his parents mostly ignored him; He did manage to befriend his neighbor Lettie Hempstock and her mysterious family.

The story quickly turns much darker.

A family boarder steals the family car and commits suicide in it; then a monster uses the boy's body as a means to enter this universe and terrorize the local people. The monster takes on a human form, calling herself Ursula Monkton and injects herself into the boy's family, moving into the home and seducing the father.

Lettie's family proves to be more than they seem as they battle Ursula and protect the boy from her/its threats.

I really enjoyed this novella, which began as a childhood memory and turned into a horror / monster story. The characters could have come from the dark fairy tales of Roald Dahl and the creatures and magic could have been found in the fantasy animated films of Hayao Miyazaki

I liked the moral ambiguity Gaiman presented. Ursula arrives with good intentions. She wants to give people what they want; but when she discovers that people want money, she hurls coins at them and makes money appear in their throat. Lettie summons creatures to defeat Ursula, but they are all then threatened by these powerful creatures.

The Ocean at the End of the Lane is one of NeillGaiman's shortest novels, but he packs a lot into the story.