"The Painted Bird" by Jerzy Kosinski 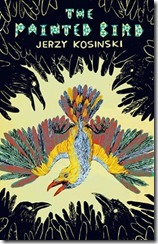 A young boy wanders alone from village to village in eastern Europe during World War II, experiencing fear, abuse and perversion at nearly every turn. His hair, eyes, and skin are dark, so he is labeled a Jew and/or a Gypsy - both capital offenses under the Nazi occupation.

The cruelty and depravity he encounters only worsens as his journey continues. For six years, he escapes a terrible situation in one village to a new (often worse) situation in another village. One farmer gouges out the eyes of a field hand he suspects of flirting with his wife; another man locks the boy in a room with a large violent dog every night; he witnesses one family engaged in incest and bestiality. Against it all is the backdrop of the Nazis shipping Jews, Gypsies, and other minorities to suffer and die in concentration camps.

He is beaten and nearly murdered multiple times; nearly everyone he meets is superstitious, ignorant, and cruel. Many of the peasants are active participants in rape, murder, and animal abuse.

The Painted Bird by Jerzy Kosinski is a twisted coming-of-age story that shows what happens when a child grows up knowing nothing but fear and hatred and chaos. There is a stark contrast between the straightforward first-person narrative style and the horrifying tales of chaos the narrator experiences.

It is a brutal story that left me shaken. It is powerful and it is a classic. But you need to brace yourself before reading it.