“The Princess Bride” by William Goldman 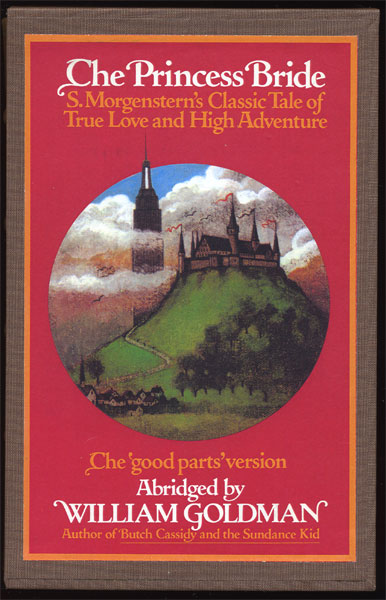 By now, you have probably seen the 1987 movie based on this book (If not, stop reading and go watch it now. You're welcome). The plot of the movie follows closely the book on which it was based. This is not surprising; William Goldman wrote both the novel and the screenplay. But the backstory of Goldman's life and reactions is much richer in the written version.

The Princess Bride by William Goldman is a story within a story.

In "The Princess Bride", William Goldman invents a fictitious novel by a fictitious author (S. Morgenstern) about a fictitious "historic" event in a fictitious country centuries ago. He then invents the story of how his father would read this book to him when he was a boy. When fictional Goldman buys the same book for his fictional son, he discovers that his father had been skipping all the boring parts, which are considerable. This, Goldman claims, was his motivation for creating an abridged and annotated version of Morgenstern's work. The result is a story within a story - a fairy tale wrapped by a family story.

In the fairy tale, young farmhand Westley falls in love with the beautiful Buttercup. He leaves Buttercup's family farm to seek his fortune. When news reaches Buttercup that Westley has been killed by the Dread Pirate Roberts, she agrees to marry the wicked Prince Humperdinck.

Along the way, Goldman introduces a menagerie of memorable characters - most notably Fezik, the Giant, who loves to make rhymes; and Inigo the Spaniard, who is obsessed with finding and killing the 6-fingered man who killed his father.

It's a fairy tale; it's an adventure story; it's a tale of political intrigue; but, most of all, it's a love story between a farmer's daughter turned princess and a farm boy turned pirate turned rescuer.

It's silly and it's fun and (spoiler alert) it has a happy ending.