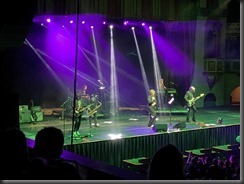 Some things stay the same and sometimes that is a very good thing. Brothers Richard and Tim Butler formed The Psychedelic Furs in the late 1970s and they form the core of the band today. Saxophonist Mars Williams joined in 1983 and remains with the band.

Saturday night, they were joined by Amanda Kramer (keyboards), Rich Good (guitar), and Zack Alford (drums) to the delight of thousands of fans at the Aragon Ballroom in Chicago's Uptown neighborhood.

The evening began with a set by LA-based band X, a group I remember from my college days in the early 1980s. Back then, they were primarily a punk band, but they showed greater range on this night than I remember from their LPs in my dorm room. In addition to their earlier hardcore music, we heard a mix of rockabilly and alternative rock. X maintained even more consistency over the decades than the Furs. Their founding members - D. J. Bonebrake, Exene Cervenka, John Doe, and Billy Zoom still perform together and still know how to rock hard. 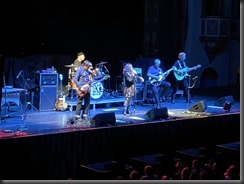 Listening to X primed the audience for The Psychedelic Furs, who opened by launching into the frantic "Mr. Jones", which got the crowd bouncing. Of course, the biggest cheers came when they played their biggest hits, such as "Pretty in Pink", "Love My Way", "Heaven", and "Heartbreak Beat". These songs were recorded and released in the 1980s, but they sound fresh today. Vocalist Richard Butler's voice remains unchanged over the decades and the rest of the band retains a high energy when playing these songs for the thousandth time. Thanks in large part to Richard’s vocals, the live performance retains the technical quality of their recording sessions.

The Psychedelic Furs were part of a strong group of British synthpop bands that emerged after the punk movement of the 1970s. They have had more staying power than most of their peers, thanks to strong melodies and arrangements and a commitment to touring for the past decades.

We nearly saw a second show when an unstable patron tripped and fell, knocking heads with a woman in the front row of the balcony, nearly sending both of them over the railing. Thankfully, no one was seriously injured.

And no one went home disappointed from this excellent, high-energy show.