"The Recognitions" by William Gaddis 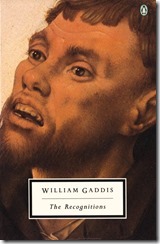 The Recognitions by William Gaddis tells the story of Wyatt Gwyon, a talented but commercially unsuccessful painter. Recktall Brown, an unscrupulous art dealer, convinces Wyatt to produce paintings in the styles of Flemish masters and sell the as newly discovered originals. But it tells many other stories of dozens of characters who pass in and out of its pages.

There are some things that I really like about this novel. I marveled at the cleverness of much of the dialogue. I particularly enjoyed the fragmented conversations pieced together at cocktail parties - a technique Gaddis repeated multiple times. I liked the parallel issues of art forgery, a currency counterfeiting, plagiarism, and passing off an artificially aged mummy - different takes on those who dishonestly profiting from the works of others.

But the book went out of its way to confuse the reader and obfuscate its stories.

Gaddis seems to take pleasure in confusing his readers. He jumps from story to story and from character to character with wild abandon. I frequently found myself flipping back several pages in an effort to figure out who was speaking or who the author was describing. Even then, I was often unsuccessful. Add to this that some of the dialogue is in a foreign language and those phrases are sometimes significant to the story, so the reader is forced to set down the novel and translate the phrase. A thousand pages of this left me fatigued and confused.

Gaddis seemed to know that his novel’s complexity would tire the reader. He included one scene in which a book critic admits to reviewing a long book after reading only the jacket.

I powered my way through it, but ultimately found it unsatisfying.