"The Silmarillion" by J.R.R. Tolkien 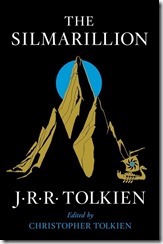 The Silmarillion by J.R.R. Tolkien is a collection of stories about Middle Earth - the world Tolkien created in his more famous works The Hobbit and The Lord of the Rings.

It begins with the creation of the world and the Ainur, immortal beings who would take physical form and become the Valar and the Maiar. They go on to create elves, men, dwarves, and all the races that would populate Middle Earth.

It ends with the rise of Sauron, the creation of the rings of power, and the beginning of the Third Age, which is chronicled in detail in the two stories mentioned above.

In between are stories of gods and elves and men and battles and romances and how the world  of Middle Earth came to be. There is the love story of Beren and Luthien and there are epic battles and there are evil creatures, such as orcs and dragons and balrogs. There is much battling of the evil Melkor throughout the ages.

It is a very ambitious work, covering the thousands of years of the first two ages of Middle Earth.

These stories were written by J.R.R. Tolkien, but not published until after his death. His son Christopher compiled and edited them for this book.

The Silmarillion is a difficult book to read. Keeping track of the many  names of people and places is a challenge. They tend to have long, unfamiliar names, many of them go by multiple names; and they often pop up in the book once, never to return. In addition, the prose reminds me of a translation of an ancient text - descriptions are long and poetic. But

But, if you are a fan of Tolkien and wish to dive deeper into the history of the world he created, you will enjoy The Silmarillion.