The Smithereens Join Forces with Marshall Crenshaw for a Great Show 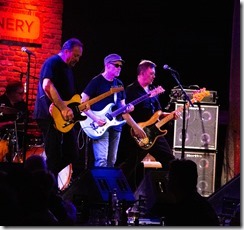 What does a band do when they lose their lead singer? The Smithereens faced this dilemma when founding member Pat DiNizio passed away in 2017. The remaining members decided to hire guest vocalists for their 2021 tour. Chicago was fortunate to host Marshall Crenshaw as the Smithereens' singer Saturday night at the City Winery. Crenshaw is most well-known for his 1982 Top-40 hit "Someday, Someway", but he has continued to perform all these years and his guitar work appears on some Smithereens records.

This was only the second stop in the band's first tour in a year and a half and they exhibited the pent-up energy of musicians who have missed performing live.

The Smithereens formed 40 years ago and released their first album in 1986. The three surviving founders (lead guitarist Jim Babjak, bassist Mike Mesaros, and drummer Dennis Diken are still with the band and Marshall joined them on rhythm guitar and lead vocals.

They played many of the songs that I've enjoyed for decades - "Behind a Wall of Sleep", "I’m Sorry But I Won’t", "Miles from Nowhere", "The House That We Used to Live in", and "Blood and Roses". They also enthusiastically covered songs written and recorded by others, including "No Matter What", "Bristol Stomp", and The El Dorados' 1955 high-energy R&B hit "At My Front Door". In introducing one cover song, Crenshaw quipped "For me, these are all covers", drawing a laugh from the audience. The 4-song encore set featured 3 cover songs: "Reason to Believe", "Where Have All the Good Times Gone?", and "Ramblin' Man".

The band was not quite as tight as they were when I last saw them in Cincinnati in 2001, but they made up for it by the passion they brought to the stage. What most impressed the crowd is how much fun the band was having, bantering with one another and with the audience. The musicians are aging, but they still possess the energy of a young garage band playing a gig at a local pub.

This fun and energy is what rock & roll is all about!