"The Soldier's Art" by Anthony Powell 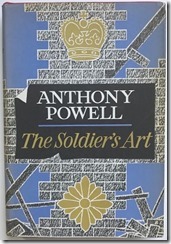 It is 1941 and London is suffering regular bombing raids by the Germans.

Anthony Powell's The Soldier's Art (volume 8 of A Dance to the Music of Time) follows narrator Nick Jenkins's life in the army and the lives of those around him.

The war takes its toll, as bombs kill several of Nick's family, friends, and acquaintances and others die in battle or suicide.

Nick encounters his old friend Charles Stringham, who appears to have recovered from his alcoholism and found some stability - if not happiness - as a cog in the army.

Nick continues to bump into many of his old acquaintances, often at the same time and place - coincidences that are common in this series.

This book shines a light on the petty politics of military and its officers. The omnipresent Kenneth Widmerpool features prominently and he seems to be more and more dominated by his ambition.

I find myself more and more engaged in these characters as the series progresses. I grieve at their deaths of some and I hope for their recoveries of others.