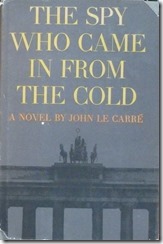 It is the early 1960s at the height of the Cold War. Alec Leamas is the Berlin Station Head for the British Intelligence agency known as the "The Circus". Operations in Berlin have not gone well and Leamas is taking the blame.

When Leamas returns to England, the Circus chief - who goes by the name "Control" - gives him a new assignment. Leamas is told to pretend to leave The Circus under bad circumstances and lead a life of isolation, alcohol, debt, and bitterness. The Circus even circulates rumours of incompetence and embezzlement to make his despair more convincing. Sure enough, an agent of the Eastern Bloc approaches Leamas after he` is released from jail on an assault conviction.

Leamas defects to the other side and sows suspicion amongst his enemies. But is Leamas the manipulator or is he the one being manipulated?

John Le Carré is a master at building suspense. For a novel with very little action (much of it is interrogation), I found myself riveted to "The Spy Who Came in from the Cold" - anxious to know what will happen next. He kept me guessing until the end - pointing the reader in one direction, before pulling back the curtain to reveal a new twist.

On the surface, this is a complex spy novel with espionage and double agents and double-crossings and triple-crossings.

But there is a subtext to this novel that elevates it from good to great. The Communists of the East and the Democracies of the West each hold to ideals that they believe are best for their society. Yet, the agents protecting these societies are willing to completely ignore those ideals to protect their societies. To them, values are meaningless when a war must be won. To protect the interests of the state, bad guys are protected, and idealists are destroyed. England may believe in democracy for its citizens, but The Circus will abandon all national principles to win the Cold War. Leamas has become almost numb to this hypocrisy. He strives to ignore the moral issues and just do his job. If it were not for the love story, he would have succeeded.