"The Sword of Shannara" by Terry Brooks 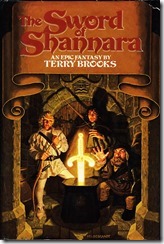 Shea Ohmsford was living a quiet life, running a farm with his brother Flick. Shea knew he was adopted, but when the tall stranger Allanon shows up, he learns that he is half-elf and the last living member of the legendary Shannara family.

Allanon convinces the brother that their land is danger from The Warlock Lord - an evil wizard, who seeks the power of the legendary sword of Shannara; so, the three of them set out on a quest to find the sword. Along the way, they are joined by men and elves and attacked by gnomes, trolls, and black flying monsters known as "skull bearers". They are separated during their journey, but continue their mission to thwart the Warlock Lord.

This is the story of The Sword of Shannara by Terry Brooks. If it sounds familiar, it is because Brooks acknowledges J.R.R. Tolkien as one of his influences.

Comparison's with the Lord of the Rings are inevitable: A disparate group, consisting of men, elves, and dwarves travel across a mystical land to seek a powerful magic relic, preventing the evil wizard from acquiring it first. There is even a crazy gnome with a startling resemblance to Gollum.

If you can get past Brooks's obvious "inspiration" for his plot, he does tell a pretty good story. The narrative is more traditional than Tolkien's and more appropriate for the simpler story. I enjoyed it.